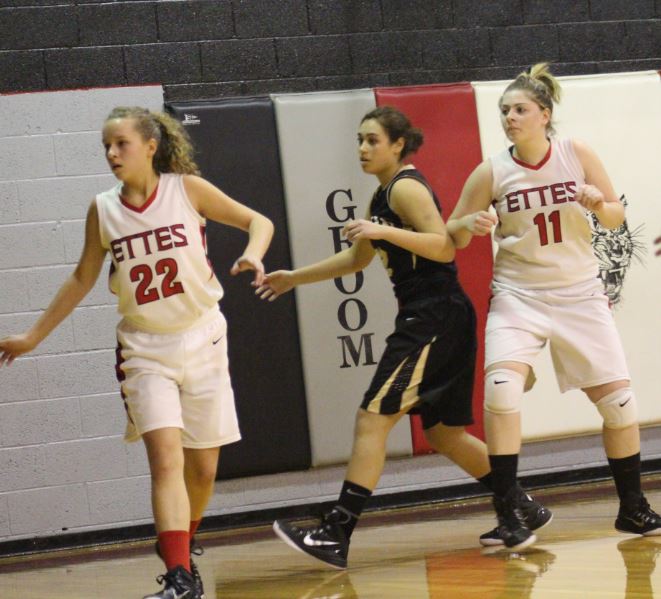 Senior Shaunna Corley and freshman Chelsey Lamb anchor the defense for the 'Ettes. This picture was taken Tuesday, Jan. 13, in Groom. During this district contest, the 'Ettes fell to McLean 22-66.

Yesterday night, Jan. 13, the high school basketball teams faced off against McLean. This was the second district basketball game for both the Tigers and ‘Ettes. The ‘Ettes fell short to McLean 22-66. However, the men won big 55-35.

The ‘Ettes were led by seniors Shaunna Corley and Cari Weinheimer, who both had 6 points in the loss to McLean. Freshman Chelsey Lamb followed with 4 points.

“We started out very well,” sophomore Caroline Britten said, referring to the ‘Ettes only being down by 6 at the break. “But after halftime, we lost our energy.”

For the Tigers, Nate Roskens claimed the high-point position with 14 points and 9 steals. Hayden Ritter followed closely with 13 points, 5 steals, and 7 rebounds. Nick Bohr also contributed with a double-double with 10 points and 16 rebounds.

“It was a good defensive effort,”assistant coach Larry Roskens said, “We held them to less than 10 points a quarter, except a 15-point third quarter. If we can do that, make our free throws, and stay out of foul trouble, we will be good.”

Friday, Jan. 16, the Tigers and ‘Ettes will hit the road for their next district contest, the Hedley Owls. The ‘Ettes will be the first game of the double-header and will start at 6:30 p.m.

If you missed the game you can watch it at the bottom of the page. It could be scooted down some due to page space.