Dinner and a Show – Area – Ready to go

Groom One Act Play advances to area from bi-district. Area will be Monday, April 3 at Randall High School. This Friday, March 31, will be the community performance at 7 p.m. in the auditorium. Arrive early if you would like to purchase the $7 dinner. Serving will begin at 5:30 p.m. Children under school age can eat for $5. "Advancing is really great, but in order to keep advancing, we need to keep working hard," senior stage manager Mason Miller said.

As the group continues to prepare for area competition, the Groom One Act Play troupe will be performing for the community on Friday, March. 31 at 7 p.m. in the auditorium.

“We do a public performance because the arts are important, and we like to provide entertainment to our community. Our community fully supports one act play,” OAP director Aimee Fields said. “It is nice to give everyone an opportunity to see the play.”

There will also be a pulled pork dinner before the performance, starting at 5:30. The dinner will be $7 for adults. Feeding children below school age will cost $5.

“The dinner helps defray some of the expenses we incur such as costumes, makeup and props,” Fields said.

Area will be at Randall High School on Monday, April 3. Admission will be $5.

According to the cast and crew, they have high expectations for their play and hope to extend their season.

“I was excited to get to perform yet again,” senior actor Charity Perry, who holds one of the lead female roles, said. ” I love OAP and just thinking that it could’ve been my last performance upset me a lot.”

Students have been practicing since early January and will continue practicing.

“It’s really great when you see all of your hard work pay off when you advance,” junior actor Chelsey Lamb, who holds the other lead female roles, said. “I’m hoping that we continue to go far and work hard.”

“I’m excited to see where this year’s play and cast lead us,” Perry said.

The performance schedule for the Area Contest is attached. Each play takes approximately 40 minutes, be sure to arrive early. The contest will be on a rolling schedule with one play immediately following the other. 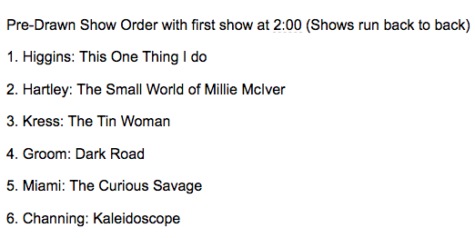