My Partner … Our Time 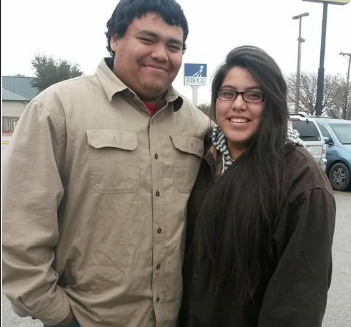 Alejandro Toby Ybarra and Senior Olivia Gonzalez go out to celebrate Ybarra’s birthday. These two have been engaged now for about a year and two months.

How I Met My Partner … in Time

The best year I’ve ever had was when I met my fiance at East Central High School in San Antonio. The year before we became a couple, we hated each other – I mean hated the very sight of one another, even the existence of each other. We would yell at one another in the halls; the scenes were terrible. The situation was even worse because he was dating one of my friends, which made it incredibly hard to get away from him. As the year went by, we became more used to seeing each other everyday, and we began to hate each other less.

Well, at least, I hated him less.

When the year closed, I couldn’t find a reason to talk to him during the summer. Summer went by fast, and it was time to start school again. The first day I saw him I said “hi,” even when I looked so awful, happiness flooded through me when I saw him. Unfortunately, my friend and he were still on and off. A few months later, they finally called their toxic relationship a quits.

“THANK GOODNESS,” I told myself.

Toby, my fiance, and I talked during those months. We talked all the time. We talked in between classes, at lunch, after school. We even called and/or texted each other;  he’s amazing. When they broke up, we became even closer, the days were better, and the nights grew longer because of Toby. As the semester went by fast, we no longer had lunch together, which caused me to be heartbroken. Although, that never stopped me from seeing him. I always found a way to have lunch with him, whether I finished my work early so I could leave class to be with him, or I just went to lunch without going to class.

I was a rebel in love.

He made me smile from cheek to cheek, giving me butterflies, and making my heart melt. I knew I had strong feelings for him just by the way he made me feel everyday. A few weeks later, I met his amazing parents before we were officially a couple. Meeting them made me fall in love with him even more. We both liked each other a lot. I would find excuses to hold his hand, which made him blush. I would find reason to go see him. Finally, after a long time, (It was only a month, but it felt longer, like a billion years) he asked me to be his girlfriend. We have been through our ups and downs many times, but he can still deal with my mood swings.

He never fails to surprise me, and he never makes me feel like I’m unwanted.

He spoils me so much, although not with flowers or jewelry, but with kisses, hugs, and his wonderful smile. Looking into his beautiful honey brown eyes, knowing that he has my back,  brushing my fingers through his curly hair, feeling that being with him is not a dream, is pure joy. I love holding his hand because he feels like home.

We have been through a lot. You can ask anyone, but the best part about going through the rough patches is that we never gave up on each other. I love the fact that no matter how embarrassed I am about something, I can count on him.

He’s my person, my best friend to gossip to, my partner in crime and in time, the person I would love to grow old and wrinkly with. We have been together for one year and five glorious months, and we will be together for many more. I’m glad to call him fiance.

You also can contact the newspaper at [email protected]

If you want a picture to show with your comment, go get a gravatar.