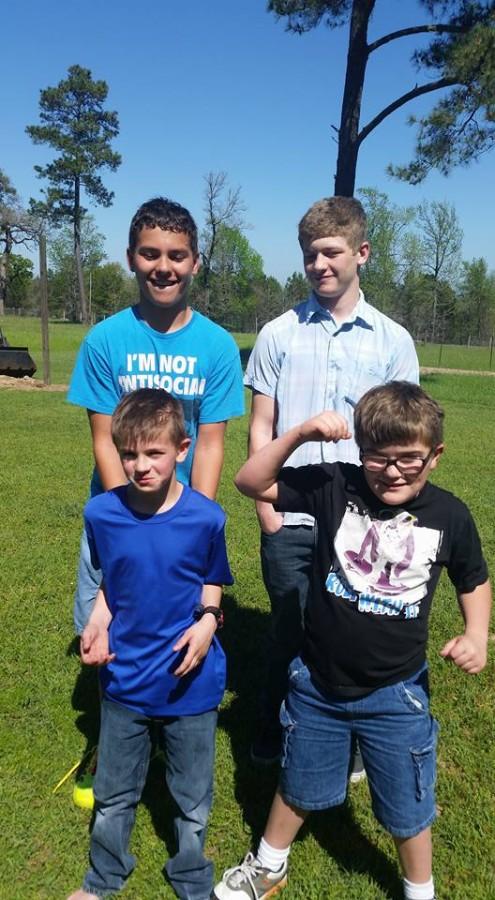 William Kelly, back left, stands next to his brother Cody Ragain for a family photo. Their brothers Jacob and Ryan Ragain join them. In this installment of “Autobiography of a Tiger,” Kelly discusses his three brothers.

My brothers are Jacob, Ryan, Cody, and, of course, I am William Kelly. This article is about my brothers and what they do that stands out in my mind.

My brother Jacob Ragain stands out not just with me, but with others, because he can do extraordinary things that other kids his age can’t. For example, he can lay on his back with his feet shaped like a “V,” knees bent and feet angling back toward his head. It is weird because no other people I have met can do that. He also moves all day, but he never gets tired. He is one of the most active kids you can hang out with because he will keep you on the go too.  I spend plenty of time running after him and trying to get him to slow down from the race that is his life. But, Jacob will not stop; Jacob is my youngest brother.

Ryan Ragain has the biggest imagination in the world. He can tell you a story for hours on end. He never runs out of stories. He loves to talk to everybody. He always has to tell everybody about his wonderful adventures with his brother and his family. Ryan is a great helper to people. He wants to make everybody he can happy. Ryan Ragain is my second-youngest brother.

Cody Ragain his is the toughest brother that I ever have had. Cody loves to stand up for his younger brothers. He will always be there to help his brothers in whatever situation they are in. He is protective over his family. Cody also is an encouraging person. He always wants what is best for himself and his family. He wants to make everybody in his family happy.

You also can contact the newspaper at [email protected]

If you want a picture to show with your comment, go get a gravatar.